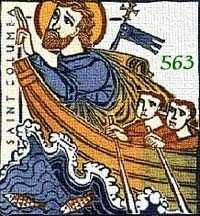 .The name Columb, Columba, Colmcille permeates the life of this city in churches, institutions, initiatives, names and tourism trail. That is a sign of the mark that he left us in our city and a recognition of the value of the message he left in his life. In more recent years, the dove of peace has encouraged many to take initiatives for healing and reconciliation locally and further afield. For all that we are grateful.

Today we celebrate a man who lived concretely in the very mixed circumstances of his time. There is no ideal time to be alive. Nobody's life is a piece of cake. In fact, life is by definition difficult even though the problems may change as the culture develops. Despite what the sports shirt manufacturer might suggest, life is not a beautiful sport! It is always a challenge to mine rich nuggets from the often hard rock of life. But the Book of Genesis recognised that it is the engagement with the realities of life that we can become great people, together and individually. We do not live in a Garden of Eden – but if we work the soil of life, a rich harvest will reward the sweat of our brow. So what might he teach us today?

First we might note from St Columba that he was part of a missionary church not one who lived a maintenance model. He had sought the truth in the struggle over a book. But he ended up realising that truth and God were to be found, not in defending a parochial interest but in going far beyond his comfort zone.And that uncomfortable trip across the sea brought him to Iona. Iona is still not the warmest place on earth. It is far from any population on the mainland side and open to the Atlantic on the west. In that apparently unfertile soil, he planted seeds that bore fruit, much of it long after his time.He might ask us today in this city and diocese whether we are known for being generous and courageous to a fault. Are we prepared to take risks and to risk mockery for the sake of the Gospel? He might gently probe and inquire whether we put as much energy into preaching the Gospel as we do to looking after premises.

The Church of God is made up of living stones, not hard, cold chiselled ones. Our buildings are at the service of the mercy mission, used to build a field hospital, not creating a top-class clinic for the few who need little more than spiritual cosmetic surgery. The old saying suggested that it was better to have a wooden chalice and a golden priest than a golden chalice and a wooden priest! As we seek to develop a pastoral plan for the diocese, we have to focus on what our intended outputs are and attune our work towards that goal. The spread of the Gospel and the healing of broken hearts are more important than our comfort. Indeed, our comfort may actually be damaging to the Gospel that we claim to preach.

Secondly, Columba went to Iona because of bloody feud. We have known tribalism and its awful results down through the centuries. Thus we have to give huge thanks and praise to all those who want to bring us beyond it. Murder, wars and battles are always a sign of failure and loss – never glorious. Pope Francis recently used a phrase when asked about Donald Trump's plan to build a wall between the US and Mexico. Christians believe that buildings bridges is much better than building walls. We are where we are in NI because many courageous people have build bridges, physically and metaphorically. Perhaps we have a message that we can pass on at a time when there seems to be a trend for countries to move towards isolationism and separation. I know that there are many failings in an excessively bureaucratic European system. But the early Irish monks knew that borders are human inventions and that Europe had a unity much greater than the changing borders that have come and gone on the continent. Columba and so many Irish missionaries would tell us to do whatever builds human solidarity across borders rather than what protects interests within borders. Being self-referential is as damaging for a state as it is for a church.Finally, he chose a very difficult life, a road less travelled, even in his day. The life of a monastery was disciplined and demanding. But the Jesus who died on the Cross will tell us all that truth is not easily come by and that there is no such thing as cheap grace.

As in Columba's time, there will always be generous hearts who will respond to the call to idealism. A church that thinks that the best young believers would prefer an easy and unchallenging vocation will be disappointed and will not reflect the radical message of discipleship that Jesus describes in the Gospel. A praying missionary heart wore away a rock with his knees through prayer. A courageous missionary heart walked the hard roads and made our path easier as we follow. The church of Jesus that Columba served will be strong when it challenges people to great generosity, heroism and courage. It will be weak when it tries to catch up with society rather than being able to maintain a prophetic voice. Jesus asks, not for 'girners', but for happy complainers. When we speak the truth in love we can help society to create hope and belonging. That is the mission that we have in our day, and especially in the Year of mercy.

Thus I believe that Columba would tell us not to be afraid of the stormy seas that we might have to cross. We may have to change from our current model of church to one that is closer to the Church that Columba knew. If that is God's way forward, so be it, as we need not be afraid of putting out into the deep for a big catch, whatever those who stand laughing on the shore might think.

Our celebration of our patron saint is not just a look at the past but a grateful celebration of how he faced the future in his time. The Promised Land is always before us, never in the past. We are a Eucharistic people – so, today we give thanks and ask the Lord to be our food for the journey, wherever it may lead us.