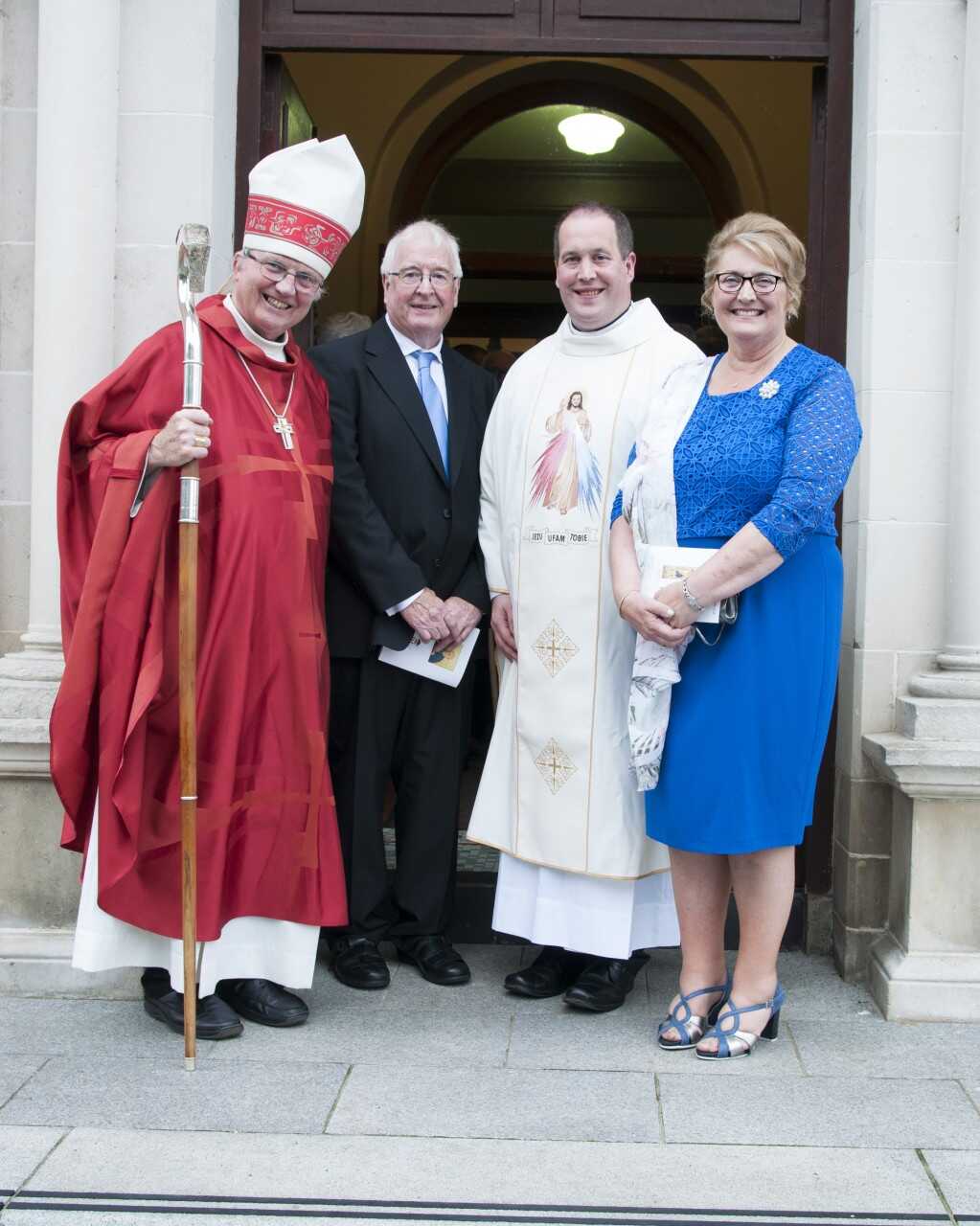 In St Peter's Square in Rome in front of the Basilica, there are two huge statues of Saints Peter and Paul. St Peter bears the keys and St Paul the book of the scriptures. And it is on these two pillars that the early church was formed – on the proclamation of the word which cuts like a two-edged sword and on the visible unity within the Body of Christ. Thus this feast day is a wonderful date for the ordination of a young man who wishes to give his whole heart and life to being an apostle of Jesus – for that ministry will be based on the stumbling faithfulness of Peter and the passionate preaching of Paul.

What can I say to you, Charles, as you come before the Lord to be ordained for service in the Pallottine congregation?

Firstly, the Pallottine tradition has a wonderful scriptural motto - Caritas Christi urget nos (2 Cor 5:14), the love of Christ impels us. Charles, you are here today because you have sensed that unsettling and exciting call to go out from your comfort zone, just as the early Church was driven into the hurting peripheries of their city and from Jerusalem to the peripheries of the known world.

And the Gospel mission that drives you on is based on the example of the God who so loved the world that he sent his only Son (Jn 3:16) to be humble even to accepting death on a cross (Phil 2:8). You want to speak Jesus who is the Truth into the heart of the world. It is ironic that, after decades when we were told that there was a clash between irrational faith and reason, we are now faced with the reality that our culture is talking about post-truth and it is believers who are insisting the possibility of truth! We have such a focus on the individual creating their own reality and truth that anyone who speaks of truth and reason is caricatured as being dogmatic, illiberal or bigoted.

And our culture is not only reluctant to accept the possibility of agreed truth. Where there is no truth, there is no meaning to life, other than a meaning that I create. A modern French philosopher wrote some 30 years ago that "We live in a world where there is more and more information and less and less meaning." (Jean Baudrillard quoted in The Tablet, 20 May 2017 p.4). In an age of post-truth, where everything is only interpretation, that doesn't lead to freedom but to the domination by the strong. You feel called and driven by the love of Christ to proclaim the Truth who sets us free from the domination of the strong. Jesus invites us to be freed from what happens when we seek the knowledge of good and evil in places other than where the Creator tells us. Good Christian teaching offers us a real theology of liberation. Dedicate your life to letting the love of Christ for the world and for its little people drive all that you do, whether you are working here or halfway round the world.

Secondly, the Pallottine family has a very revealing name – Societas Apostolatus Catholici, the Society of the Catholic Apostolate. Your wise founder wanted to focus on the call to all baptised to spread the Good News. That message has been re-echoed in the last 50 years – but many of our parishes and dioceses are still functioning in an unhelpful clericalist mode.

Clericalism occurs when the clergy think they have to do everything and then find themselves exhausted because they can't do it. A clergy-dominated church or parish will fail to develop the apostolate of the laity. And that apostolate is not a threat to the ordained minister. The priest is ordained to do three things – to preach the Gospel, to celebrate the sacraments and to lead. In Ireland we used to have a great missionary tradition that inspired thousands of our best young men and women to dedicate their lives to mission and go to the ends of the earth. That energy is no longer there to the same extent. The task for the modern Irish church is to be re-energised by the mission of every baptised person to evangelise and bless our hurting country with the one who is the Way, the Truth and the Life.

But the temptation to clericalism has often reduced the call to a lay apostolate to that of lay ministry. That can end up with being just a clericalisation of some laity who help the priest to do his things – distributing Holy Communion, holding weekday services or even burying the dead. But it is not a development of the vision of Chrstifideles Laici. The real apostolate that Vincenzo Pallotti prophetically made space for the mission of the ordained to preach, sanctify and lead and the mission of the each member of the non-ordained to have an apostolate within the missionary people. The service of the ordained minister is to teach, sanctify and lead in Christ's name so that the evangelising apostolate of the church can be carried out by every baptised member. A church of clericalised clergy and laity will not attract and inspire young people because it is not faithful to the Gospel idealism of Jesus. The vision of the Pallottines is one that we need in modern Ireland. Be proud of your heritage and share it with the rest of the local church where we have not developed a vibrant lay apostolate for all. There is absolutely no contradiction between the ministry of the clergy and the apostolate of the laity. Be a sign of the wisdom of Pallotti to our modern church.

Thirdly, you are taking on a difficult role. But don't feel smug about how much you might be sacrificing. Life is difficult for so many people out there, whether they are young or old, single or married, ordained, consecrated or separated. The myth of salvation by maximum pleasure and maximum freedom for all is so deceptive a lie. Jesus says that salvation for the world comes through heroism, generosity, self-sacrifice and love. And those who propose that wise truth will be criticised. So your celibate and modest self-style is not a source of personal pride but a counter-cultural prophetic act about what really liberates us. Jesus quoted Jonah as a sign to the people of his day (Matthew 12:40). You, by your life-style of simplicity and solidarity with the weak are meant to be a sign, an icon of Christ to this generation. Your ministry may ask you to suffer for people. But the really hard bit is to suffer with people – that is what compassion means. Jesus was not afraid of being humble, even to death on the Cross (Phil 2:8). The ordained minister in a special way, in being configured to Christ, is not to be afraid to go to the human peripheries and sit there in apparent failure with those who experience terrible loss and failure. Your own vulnerability is not a barrier to you being in solidarity with people. It is a grace to enable compassion and mercy to grow in your heart through the grace of Jesus.

Today, on your ordination day, I invite you to look to the figures of Peter and Paul. The former was sustained by the prayer of the church in his time of trial and by the mission of Christ in his daunting ministry of leadership. And the latter did not convert the world – but ran the race, fought the good fight to the finish. That was all he was asked to do. Do not be afraid of proclaiming the love of Christ which drives you on. Be dedicated to developing the apostolate of the laity in missionary church. And never be ashamed of witnessing to the Cross of Christ – for divine weakness is stronger than human strength.Look forward and not back, for the Promised Land does not lie behind us. Help the people of this generation to believe that they too can

Seek God and find him;

seek him always and always find him. (St Vincenzo Pallotti)

Do that and the Lord will help you to do great things, because of your dedication and despite your frailties.

Solemnity of Saints Peter and Paul 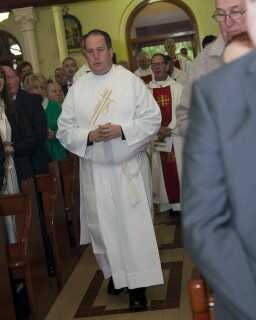 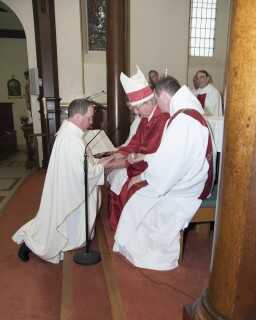 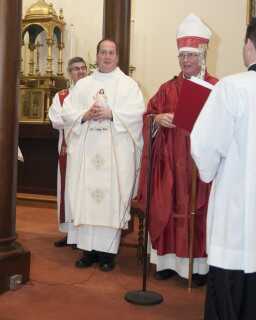 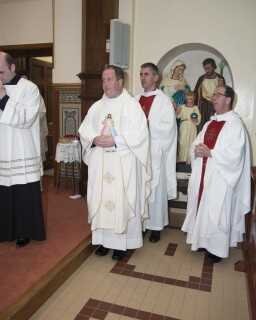 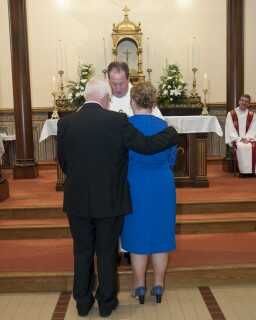 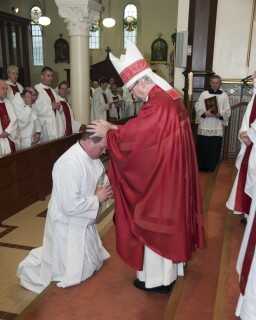 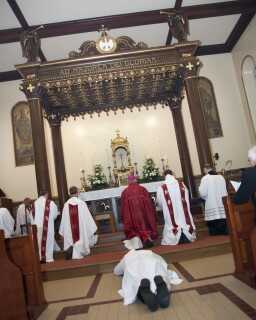 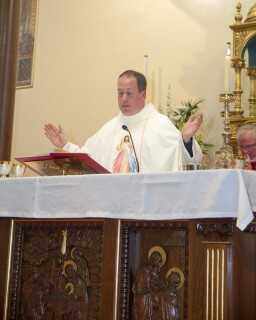 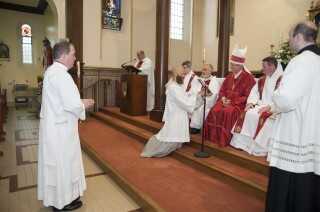 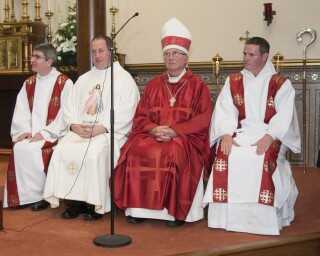 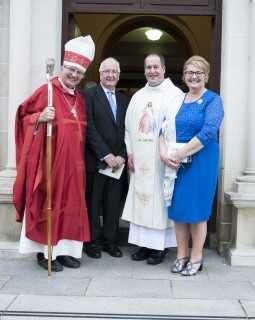