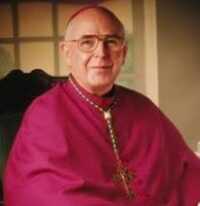 Edward Daly was born in Ballyshannon and grew up in Belleek. At the age of eleven, he travelled to St Columb's College, where he became a boarder. Thus began an association with the Derry City that he would grow to love and which would become synonymous with his name. After St Columb's, Edward was accepted as a student for the Diocese of Derry. He studied in the Irish College in Rome, a city that he loved and always loved to return to.

The approach to his ordination to priesthood in 1957 was overshadowed by the serious illness of his father, Thomas. In an act of kindness and consideration which Edward never forgot, the then Bishop of Derry, Dr Neil Farren, arranged for the ordination to take place in Belleek. Sadly, his father died just three weeks prior to his ordination. In a further act of consideration, Fr Daly's first appointment was as Curate in the Parish of Castlederg 1957 – 1962. (This was the nearest parish in the Derry Diocese to his hometown of Belleek.)

The Derry of the 1960s was a place of song and joy, but also a place of unemployment, poor housing and deprivation. Soon the people and priests of the City were subsumed in the vortex that became The Troubles. The events of Bloody Sunday confirmed in Fr Edward the futility of violence from any source.

On 11 February 1974, Fr Edward, who had spent the previous six months as the Religious advisor to RTÉ, was appointed Bishop of Derry. His time as bishop saw extensive pastoral visitation of the parishes of the diocese with many new initiatives and of new Church and School buildings. His ministry was exercised against the backdrop of violence; it was defined by his fight for Justice and his total rejection of violent means. Bishop Edward and Bishop James Mehaffey developed a close friendship and working relationship. They were a beacon of hope in a dark time.

Shortly after his appointment as bishop, he developed serious health problems which were to persist for forty years, but this did not curtail his ministry. After suffering a stroke in 1993, Bishop Edward retired as Bishop, thus opening up another chapter for twenty years as Chaplain to Foyle Hospice. Bishop Edward touched the lives of hundreds of individuals and families in the Foyle Hospice, people of all faiths and none who were equal in his eyes.

He continued in his ministry in the Hospice until 2016, when deteriorating health finally forced him to retire. After a short time in Altnagelvin Hospital, Bishop Edward died peacefully on Monday 8 August 2016, surrounded by the prayers of Bishop Lagan and the comfort of his sisters, nephew and niece.

The Wake in St Eugene's Cathedral, followed by the funeral, saw over 25,000 people paying their respects. On Thursday 11 August he was laid to rest, according to his wishes, in the soil beside Bishop Farren

Bishop Donal concluded his homily at the funeral of Bishop Edward with these words:

"Edward Kevin Daly, your time of faithful service is over. You have fought the good fight, you have run the race, you have kept the faith."