Notice: Trying to get property 'query' of non-object in /homepages/34/d508880032/htdocs/components/com_easyblog/router.php on line 648
 Diocese of Derry - News - Rev Desmond Polke RIP 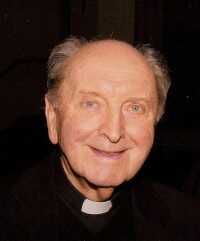 Des Polke's life in priesthood began when he worked in the bank in Carndonagh; it was there, during conversation with the late Fr Barney McKenna, that Fr Barney asked Des if he would consider priesthood as a way of life. Des left a very interesting life in banking, having served in Belfast, Derry and, finally, Carndonagh, to take up studies for priesthood.

After ordination in 1976, Fr Des was appointed to Long Tower in Derry City, amidst some of the darkest days of the Troubles. One would have thought that this would be a most challenging appointment for Fr Des, but his approach touched the hearts of many, even though his appointment was relatively short.

People recognised his genuine commitment and care for his people as a priest. Fr Des' celebration of the Eucharist, his homily and prayer life were all carefully planned and scrupulously observed. He had the gift of being a very good and understanding confessor for priests and people, both old and young. Fr Des' soft, cultured accent will also be something remembered by all who encountered him. His banking background shone through in his meticulous, careful and diplomatic ways.

Fr Des was well travelled; he was interested in classics, music, opera, drama and the arts. He played the piano and often travelled abroad to Verona, Pesaro and other places of artistic interest.

Throughout his priestly life, Fr Des experienced ill health, but he managed this with the same precision as everything else in his life, bearing his illness with great resignation and showing deep appreciation for those who assisted him in any way.

Fr Des will be fondly remembered and missed by his many friends. May his gentle soul rest in peace.