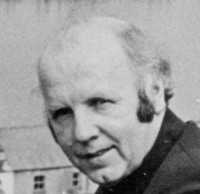 Father John McCullagh, a native of the parish of Badoney Lower, was buried there on Friday 10 May 2013 at Gortin. The Feast of the Ascension of the Lord was imminent the following Sunday. In the spirit of the Liturgy of the Church at that time, which constituted a long farewell, Requiem Mass was offered for the repose of the soul of Father John McCullagh, as we bade him a prayerful farewell and said "goodbye".

There is a little bit of dying in every goodbye. Our faith gives a sense to how we say "goodbye". But different languages and cultures too give their own sense to saying "goodbye". In English, the word "Goodbye" is said to have originally been "God be with Ye", a prayer for God's protection and guidance on the journey ahead. Like the Spanish "Adios", the French "Au revoir", or "Adieu" conveys the sense of commending someone to God until they meet again. The Italians bid one another "Arrivederci" hoping that they will soon see each other again. In our own tongue we say "Slán agus beannacht", praying health and blessing on each other as we part. The prayerful farewell which we bid our dead has all of these senses to it - there is a memory of the past, a tenderness in the present and a hope for the future.

It was fitting that Father John McCullagh be buried in Gortin for it was his wish to be buried where he had first been baptised - where he began his journey of faith, he would then rest in hope of the resurrection it promises. That he should be buried there is appropriate for yet another reason for, wherever he went and whatever he did, it was those Tyrone hills and valleys, those people and places which remained sacred to him. They appeared in his stories, their shape, their memory and their mannerisms modelled his imagination. It was out of this that he communicated so effectively because it was the faith found in people and places such as those which inspired him throughout his life; in him, as in many of us, the heart and soul of the Sperrins instilled values and virtues which, whatever life brings, remain eternally true.

It was entirely fitting too that this funeral took place at three o'clock on a Friday afternoon - for it was at that very moment on another hillside many centuries ago that Christ experienced the deepest tragedy of human life - when he died in agony on the cross. The Gospel tells how this was preceded by three hours of darkness. Christ felt forsaken in death and yielded his spirit in loving obedience to his Father, in the sure and certain hope that God, who had always been faithful to him in life, would still be faithful to him in death. Father John McCullagh experienced darkness both within him and about him.

All of us generally, and some very painfully, can experience a sense of being forsaken because of what we encounter in life. But in death, which every one of us must soberly reflect upon, we hold to the same sure and certain hope that we will be accompanied by the gentle and healing presence of the one who, in dying himself, has conquered death.

For not long after his death, the Risen Christ was appearing to the women of faith and then to his disciples, convincing them of his real presence by revealing to them the wounds of his Passion. In death, as we stand before the one who will judge us, we might well be asked to reveal our own wounds - for insofar as we inflict them on one another, we are afflicted by them ourselves. This is the hope we must cherish most, that even if through human frailty we have been unfaithful by times in life, God will be faithful to us in death. It will be in the merciful judgement of Christ that both the dead and the living might find the healing balm which only the Risen Christ can bring. In hope we pray that he may rest in peace.