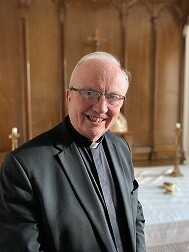 Peace as a journey of hope: Dialogue, reconciliation and ecological conversion

New Year resolutions are a good example of both our desire to do things differently – and the fact that hope is often smothered by reality and habit. But the Pope's New Year message has a key phrase – Peace will not be obtained unless it is hoped for. On January 1st we are invited to take up the Advent themes of peace and justice that are prophesied as being the gift of the promised Prince of Peace (Isaiah 9:6). Jesus has become one of us – and he asks us to believe that grace can do outrageous things even with the most difficult of situations.

So, the first thing we are asked to do this January 1st is to believe that peace is possible, somehow, sometime. That is not just vague hoping. It actually is a statement of God's faith in people and in Jesus. By taking on flesh, Jesus showed that he knew what human beings could become. By the Cross, he conquered the power of sin. He asks us today to believe that anger, brutality and greed do not have to have the upper hand. Today we are asked to continue our journey of hope – despite the discouragement and the culture that says we are not really capable of very much or of great generous ideals. Thus there is no room in the Church for a gloomy, depressing narrative about the problems of a very difficult future. God's grace will be as active in changing circumstances as it ever was in the past. Be people of hope.

In NI, we hope that our political parties will be able to engage in meaningful and fruitful discussions. We ask them to remember that the desirable outcome from talks is not party victory on particular issues. The only worthy outcome from talks is the promotion of a reconciling society that cares for the weakest. The poor, children's education, the elderly, the marginalised, the unborn should never be sacrificed in the interests of the strong. They are our first priorities. After all, the parties are elected to serve the Common Good, not to use us to serve their internal or electoral interests. Our welfare is more important than their power. They are our servants. Our fears and hurt are not their cannon fodder.

How do we do that? As Pope Francis puts it, we cannot truly achieve peace without a convinced dialogue between men and women who seek the truth beyond ideologies and differing opinions. We ask our politicians to inspire us all to seek the truth and not merely to stagger from truce to truce. We have made progress in NI because of leaders who showed hope, courage and determination, even at enormous personal cost. We will be able to hope, when we see leaders with big hearts and not just with loud voices. The long-suffering people of this island need inspiring leaders who will encourage young people to dream great things for our society in the future. They do not need those who cannot show us ways to process the pain of the past. Short-sighted sloganisers cannot build solidarity. Partisan hearts cannot build a warm-hearted society. As Pope Francis puts it, when we learn to live in forgiveness, we grow in our capacity to become men and women of peace. Those who have learned how to forgive are the heroes. Those who would entrap us in the wounds of the past are not our friends. Our young people need better than that if they are to thrive.

Thirdly, Pope Francis knows that a major global contributor to conflict and migration is economic injustice and inequality. Walls and quotas cannot crush the idealism of young people who want better for themselves than their parents had. We cannot tell them to be people of hope – but insist that we have a right to opportunities that we have but which are denied to them. It is only through dialogue that we will be able to understand others and overcome the fear that builds barriers and suspicions.

Thus, the current Christian concern for the environment is not some silly passing fad. As we know from the beginning of the Bible, God made us stewards of the earth. You don't have to be an ecologist or a scientist to know that the resources of the earth are enough to satisfy our needs but will never satisfy our unbridled greed. This world has numerous but limited resources. It is predominantly the poorest who suffer when natural disasters strike, and natural environments are plundered or polluted. Most of the wars waged by Western industrialised powers are fought on the soil of others – and it is they who do the suffering. Our wars are generally waged for our benefit and not for theirs, so that we can access the resources that they possess. Pope Benedict put in concisely some years ago

"Experience shows that disregard for the environment always harms human coexistence, and vice versa. It becomes more and more evident that there is an inseparable link between peace with creation and peace among people."[1]

An unbridled exploitation and destruction of the world's resources is a moral issue and not just an economic one. We will be held accountable if we fail to care for those whom Jesus called the 'least of his brothers and sisters' (Mt 25:40) Our actions and inaction today have consequences here and hereafter.

So, we gather on this eighth day of Christmas to celebrate the God who was and is Emmanuel, God with us, the Prince of Peace. Today we celebrate the fact that he was born of a woman, Mary, full of grace, blessed among woman, as the bible tells us. She and Joseph had to walk in hope. As Pope Francis writes, May Mary, Mother of the Prince of Peace and Mother of all the peoples of the earth, accompany and sustain us at every step of our journey of reconciliation. And may God's grace bless us with peace, hope, dialogue, reconciliation and ecological conversion in 2020.