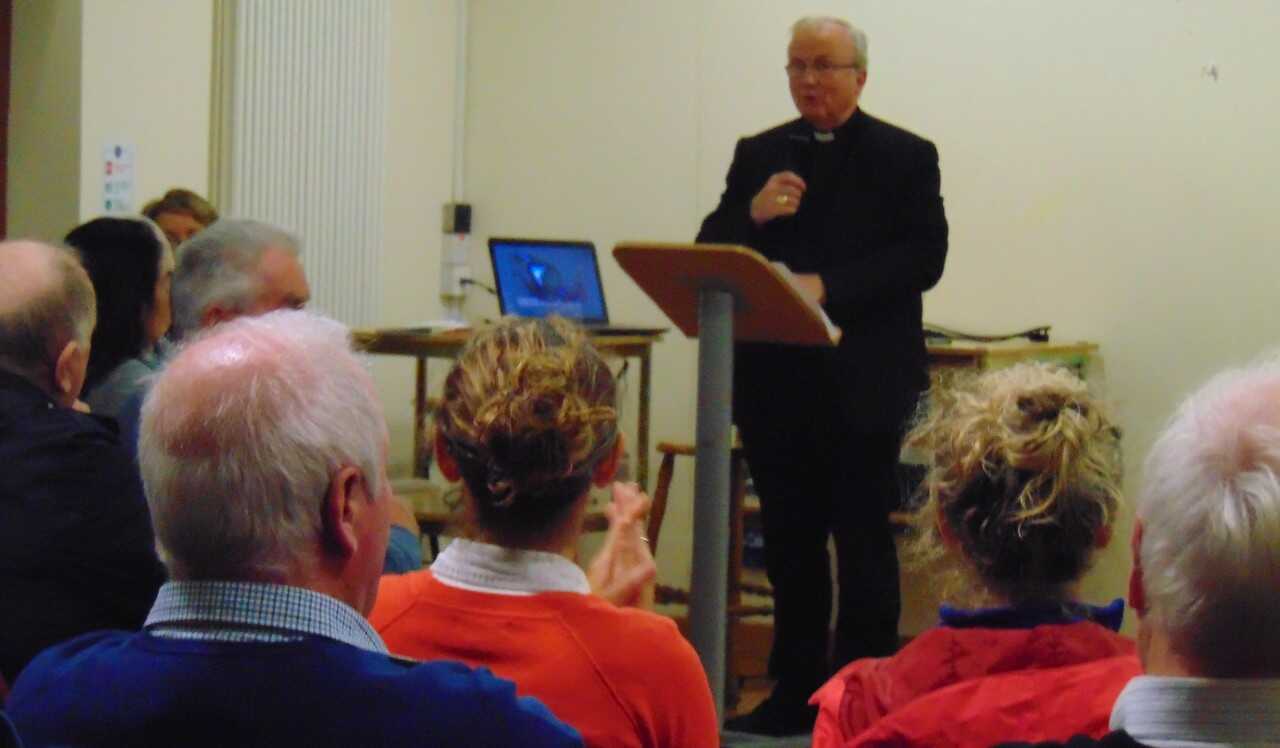 It is good to be here this evening for the launch of the diocesan Laudato Sì (LS) group, which has been beavering away with great dedication and enthusiasm for a number of months now. I am very grateful to them for their work under the leadership of Noel Bradley, a man with wide experience of both theology and the developing world.

The group was set up in the context of the wider need for a diocesan focus on justice and the specific reflections of Pope Francis in his 2015 document on the care of our common or shared home. Last week's report from 13 US Federal agencies makes clear their conviction that more than 90% of global warming is man-made. That simply confirms what Pope Francis indicated when he said that 'sister (earth) now cries out to us because of the harm we have inflicted on her by our irresponsible use and abuse of the goods with which God has endowed her'. (LS2) This is not an issue merely for those who like that sort of thing. This is now a central issue for civic society and for all of us in Church. We are all part of the problem that is now becoming clear. We have to all be part of the solution if we are to build the civilisation of love.

It is important to note that Pope Francis' document is not a scientific treatise. It is a deeply theological matter, as the poorest and weakest are always those who suffer most – whether from the mighty in Gospel times or from the strong in our own day. A concern for the environment without a deeply spiritual background is merely a social agenda. A concern for creation without an understanding of the Creator is merely an ideological campaign. People of faith are coming from a different perspective. For more than 50 years, popes have been pointing out what science has confirmed. They have repeatedly issued a Gospel call for a healthy human and physical ecology. The human person cannot flourish where injustice exists. The human person cannot blossom when the physical environment is being polluted and abused in non sustainable ways. As Pope John Paul II wrote in 1991 – 'our human ability to transform reality must proceed in line with God's original gift of all that is'. (Centesimus Annus, 1991, para 37). We are Christian activists with our own language and priorities. We are not just the ecological movement at prayer. We are prayerful people at work. We are spurred on by our faith in Jesus, and not merely by a secular ideology.

So what is the role of church teaching and of believers in the very complex world of social and environment issues? The purpose of Church teaching is to do what Pope Benedict repeated in 2006, namely to help purify reason and to contribute, here and now, to the knowledge and attainment of what is just'. (Deus Caritas Est para 28). That is not an easy prophetic space to hold. In an age of fierce culture wars, many issues are simplified as being either black or white. Christians seek not to be used merely in the service of the agendas that others have. Jesus was clear that he did not take sides in the many issues that afflicted Galilee, Samaria and Judaea in his day. He had enough confidence in the wisdom of even the cross to proclaim the truth, even when parties wanted him to take a partisan line. We are asked to develop a similar independence at the service of the Kingdom of God and not just in the service of some 'in' campaign that will come and later be forgotten.

Much of the task that we have is not merely centred around some non-Christian understanding of the earth and the environment. Our worldview is focused quite clearly on the human person living in harmony with others and with the world in which we live and of which we are a part. Our belief in the Transcendent draws us away from a self-centred preoccupation with self and here-and-now. The Christian revelation asks us to see the world through divine eyes and to judge our short span of years in the context of eternity. That perspective rescues us from an excessively ego-centric and anthropocentric view of the world. And it asks us to focus – as Jesus did when faced with the powerful lobbies of his time – on the modern equivalent of the lame, the blind and the outcast. Our task is to work for a world where people can discover that they are made in the divine image and likeness and capable of creating a society that is just and humane, worthy of the best that we can be.

Sean Ó'Connell's novel of last year speaks eloquently of 'copy wanting', a simple way of explaining what René Girard called 'mimetic desire'. Much of our modern consumerist culture is built on promoting acquisitiveness, for it tells us that 'life is too short to say no' and that we should obey our thirst. A defence of the environment and the development of a sustainable use of nature will involve challenging the assumption that everything should be reduced to the principle that 'I'm worth it'. That will involve not only challenging the consumerist mentality that benefits some but disadvantages many. It will involve us looking at our individual and ecclesiastical lives to see where we cannot just talk the talk about sustainability but walk the walk – and show others that it is possible. St Francis of Assisi, author of the prayer Laudato Sì pioneered simplicity of life in his own day. We too have to live simply in 2017 so that others can simply live. It will not be easy to break the inherent human tendency to mimetic desire and the exploitation of that by turbo capitalism. But that is where we have to find our prophetic voice – and a life-style that is consonant with the words that we speak..

Pope Francis also asks us to see ourselves, not just in the context of a horizontal community in 2017 and to consider how the actions of some powerful people and nations are damaging the world for millions of others because of the degradation of nature and unjust economic relationships. We are also asked to generously consider what sort of world we are handing on to our descendants. Just because the sea-level will not rise in my day is not excuse for thinking only of what we do me for my lifetime. As the chapter headings of Pope John Paul II's document to the Church in Europe in 2003 indicated, the key need for Europe is to find hope for the future rather than living in fear. We have to ensure that our message is not one of gloom and disaster but one that inspirers the young generation to be able to dream dreams again and not just to recycle nightmares.

And in a world where there is much cultural trench warfare, it can be tempting to seek to impose our will on others whom we see as being wrong. But the Second Vatican Council reminded us over 50 years ago that "Truth can be imposed only with the force of truth itself, which penetrates the mind both gently and powerfully" (Declaration on Religious Freedom Dignitatis Humanae, 1.) Thus in all of this, we are fools for Christ's sake, aiming to have a consistent prophetic voice and to speak the truth in love. That applies even when many might not like what we say.

So what is the role of this diocesan body? Its primary function is to be educational for the rest of the diocesan family. That can built around the production of materials, the celebration of annual or local events or the development of local initiatives which will promote a balanced use of the world's resources. It can help us to develop a language with which to speak of these critical issues in the context of ongoing adult faith formation. Trócaire is already a tremendous resource in dealing with these issues and we are so grateful to Róisín for her expertise and information. There is a big job to be done.

We live in challenging times. But then, the church has always lived in challenging times. I thank the group for the world that they have done – and they will continue to do. It is good that we are celebrating this evening on this Feast of all the Saints of Ireland, for we have a rich treasury in the best of Celtic spirituality on which to draw.