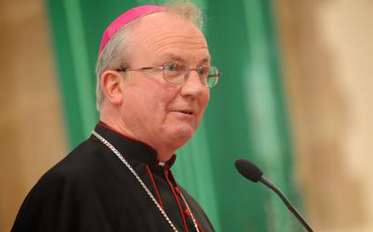 There is an old saying "ask a straight question, get a straight answer"

The Pharisees were asking a straight question about Law – and expecting a straight answer that would confirm their assumptions. But they did not get it. They got an answer that shocked them. It went against all that they stood for because it set a new standard in three areas. Firstly, it changed the whole man-centred idea of marriage where the woman could be dumped by her husband and where he had all the rights over her as his property. Secondly, it contradicted the Pharisees' idea of the Law as perfect. In respect of marriage, Jesus says that the divorce regulations in the Law were merely a concession to human hardness of heart – and not what the Creator had intended from the beginning. Thirdly, it elevated the marriage relationship to something sacred, of divine origin and not merely a question of a human contract. That all left them speechless. I imagine they regretted asking the question!

There is a common idea that Jesus was basically a harmless nice guy – a bit sweet but quite decent. But the Jesus of the Cross was actually very tough. He talked about almost impossible ideals. Chop off your hand or foot and pluck out eye if they cause you to sin. Forgive seventy times seven times. Turn the other cheek. Take up your cross and die to yourself.

That has led to the situation in our highly sexualised culture, where what Christians believe is seen as ridiculous. Don't give body till your give your heart and your life? That sounds unreasonable. But Jesus proclaimed that we are not merely animals. What we do on the intimacy of our bodies is sacred. And that was the theme of the World Meeting of Families – that faithfulness and commitment bring joy, and that fear of belonging brings loneliness.

Jesus, the young, tough idealist says that faithful love is what we are all capable of aiming for, not because it is easy, but because it tells us we are made for great things and that our lives are of eternal value. Only by making wise decisions can happiness and maturity be found. We are asked to trust his invitation to become saints.

But in Church we struggle with the challenge of teaching with the ideal and making space for the less than perfect world that people live in. The first theme of our diocesan Pastoral Plan is 'build welcoming and inclusive communities'. It is much easier – as the Pharisees preferred – to judge someone for where they are in their lives rather than encouraging people to believe that they can journey forward from where they are. Jesus called many people to be converted and to change their ways. But he was always keen to forgive them for the decisions that had gotten them to the point when they encountered him. He started with them wherever they were.

It is comparatively easy to fall in to the Pharisees' attitude of judging people from the outside and assuming that moral behaviour is the same as faith in Jesus the merciful Saviour. In a church where keeping the laws becomes the criterion for judging whether someone has faith or not, it can be comfortable to judge from the outside without having walked a mile in their shoes. There are a lot of walking wounded in the congregation and in all our families even when we cannot see it. Sexuality is a very sensitive part of people's natures. We don't know anyone's story and wounds – and very often couples who share everything can hide part of their broken hearts for fear of not being accepted. Those who have been hurt can find it very hard to trust.

The parish community is meant to be the place, not where the perfect or the lucky gather as if they owned the Church. It is a place where those who would like to journey to and with God can find a welcome and companion who will walk with them.

Everyone is called to holiness. We cannot just sit waiting in the church and complaining that many are not coming to us. Do those who are not here, for whatever reason, have reason to believe that they will find help in our parishes to dream of Resurrection? Do they see examples of how the rejected stone can become the cornerstone? That is why Pope Francis says that the church is the field hospital to help people get back to health

Going out to welcome and include people who are not quite like us is difficult. Jesus got criticised for doing that. A welcoming and inclusive Church has to accept people with their baggage. But people coming back to church have to accept church with its baggage!

A church community is meant to be a place where all of the members – whatever our past and age – can grow. Those who have been churchgoers for years have not reached a plateau where they can just sit and vegetate in their faith. Those who have made poor choices in life or who have been victims of the actions of others have to be able to meet the Jesus who wants to tell them of mercy, forgiveness, love and healing. We may be moving from different starting points – but Jesus calls us all in the same direction. That growth involves developing a mature conscience about our own actions. That does not mean that we can justify whatever we want. St John Henry Newman said that conscience has rights because conscience has duties. Without a mature conscience and desire for healing we can remain frozen in moral adolescence

Building welcoming and inclusive communities in our parishes will mean reaching out to people – and being sure that we don't come with the attitude of the Pharisees who want everything cut and dried. The people who celebrate here each week have to be able to call people to make choices that lead to God. But we have to meet them with the smile and mercy of Jesus.

That will be a challenge both for those of us who are here – and those who feel that the Church of Jesus has no room for them. Both groups need to be shocked by the love of God which is celebrated each week in the Mass.