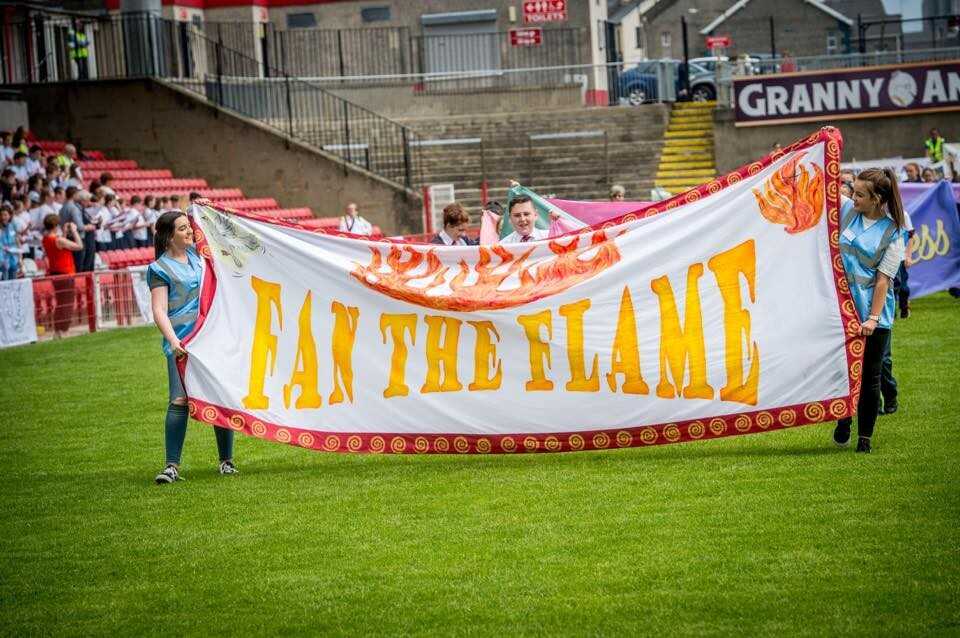 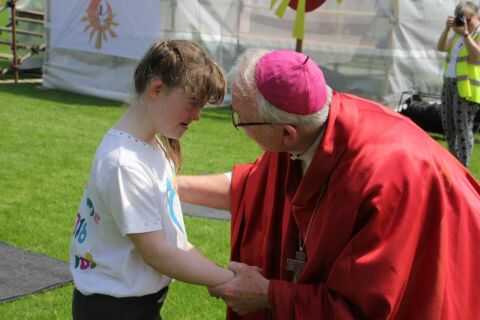 The Annual Fan the Flame Mass for all the children who have received the Sacrament of Confirmation in the Diocese of Derry during the past year was celebrated in Celtic Park GAA Ground on Thursday 7th June. The Mass also marks the end of the primary education of these young people, an important milestone in their lives.

Around 2700 young people from Derry City, Counties. Donegal, Derry and Tyrone attended, many wearing T-Shirts they had designed, reflecting the gift of the Holy Spirit in their lives and the upcoming celebration of the World Meeting of Families in Dublin in August.

The main celebrant was Most Rev Donal McKeown, Bishop of Derry. In his homily Bishop McKeown told the young people that the gift of the Sacrament of Confirmation tell us a story about who we are, each one made in the image and likeness of God.

He reminded them that Jesus, the Lamb of God, came to help carry our burdens, our disappointments and mistakes and that the Holy Spirit, who dwells within us, gives us many gifts to help bring good news to the world.

He asked the young people if they had big hearts and if they, like the Holy Spirit, were ready to show it. Bishop McKeown reminded the young people that Confirmation wasn't just a day for a party, but a day on which they were sent out to be people who believe in a God who believes in them

Long Tower Folk Group led the music and pupils from different schools assisted in the liturgy of the Word and the Offertory Procession. Every school brought a banner which formed part of the entrance and recessional procession.

To celebrate the World Meeting of Families a large jigsaw of the centre piece of the World Meeting Of Families Icon was commissioned. Pieces of the jigsaw were carried forward during a Post Communion reflection by a Parent, Pupil, Principal, Priest, Teacher, Classroom Assistant, Caretaker and Lollipop Person, representing the diocesan family of schools.

At the end of the Mass Bishop McKeown and priests of the diocese, assisted by some of the school children, released 2500 balloons symbolising the breath of the Holy Spirit living in each one of us.

This is the 12th year that the 'Fan the Flame' Mass has been celebrated. The event was made possible by the many volunteers of all ages who generously give of their time and talents to ensure that the Mass was an uplifting experience that will remain with the young people for many years. Over 100 teenage volunteers acted as Youth Ushers at the Mass.