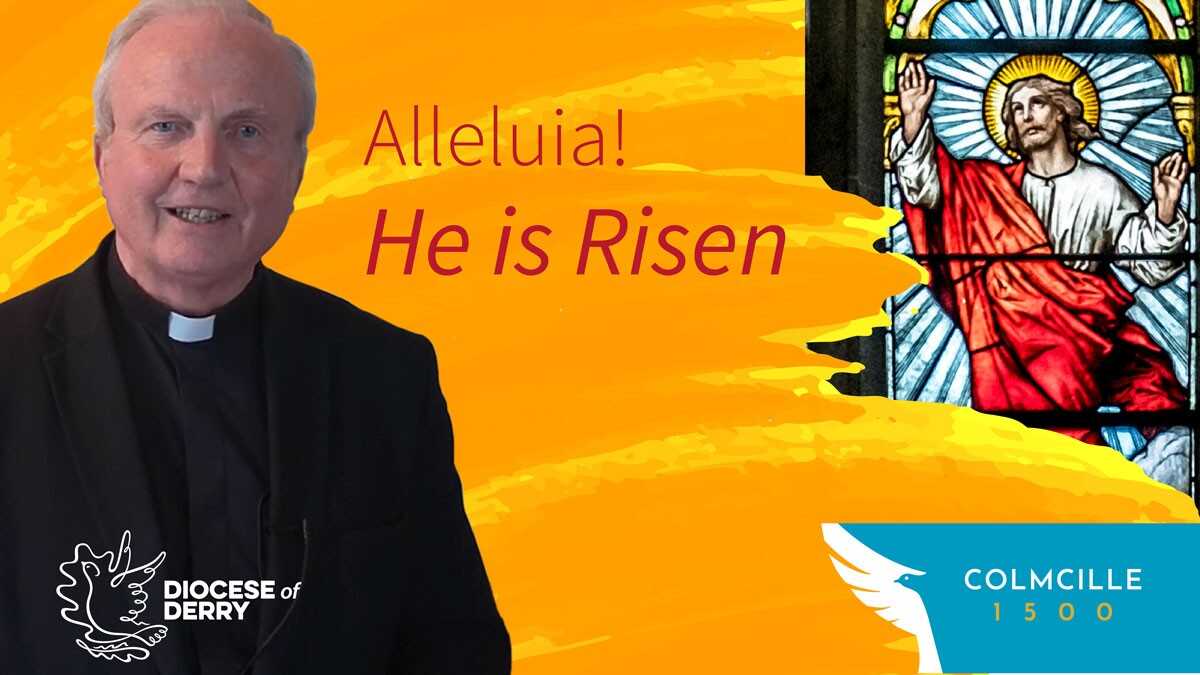 We have come through the tumultuous events of Holy Week. These had left the little group of disciples scattered and disheartened. All their plans and hopes had vanished on a dark Friday afternoon. There could be no way back and no hope of a way forward. According to one of the Gospels, Peter and the others had decided to go back to fishing. They really had been fools to expect that things might be different.

But the Resurrection of Jesus breaks that closed circle. They could go somewhere and not just round in circles. What might this dramatic event say to us today as we slowly peep out from under the heavy stone of lockdown and fear?

Firstly, the Resurrection of Jesus was not a return to the way things were before Good Friday. It was still Jesus – but he had changed. The Jesus flogged, nailed and pierced was now raised in glory. The worst that the political and religious authorities could do to him had lost out. Love was stronger than hatred and brutality. The life-giving Jesus was stronger than the death-dealing establishment.

This Easter Jesus asks us all whether we are open to a dream of a different future after all that we have died to over the last 12 months. And Jesus poses that question first and foremost to the Church. Are we ready for an uncomfortable Resurrection? Are we ready to meet Jesus is a new way? Like the apostles, we think that we know Jesus and can manage his expectations. But he will ask us whether, during the lockdowns, we have been able to die to shrivelled parts of ourselves, whether we are prepared to let him prune away those attitudes that do not serve his mission of mercy. Our first question in Church is not whether we can get back to exercising our rights to worship as we want. The shock of the Resurrection asks whether we are open to being reborn as missionaries of the 21st century. Others' need of good news is more important than any desire we might have for spiritual cosiness. A self-obsessed church is not the Church of the Risen Lord.

Secondly, we all know that this is a time of huge change for Christ's Church. And there is a theology which arises in times of crisis. It says that we are heading towards an apocalyptic clash between the forces of good and evil. But Easter's message makes me very uncomfortable with that theology.

It is right to say that every civilisation ultimately dies by suicide. A strong culture becomes fragmented and insipid without shared values that hold community together. Ultimately, western consumerist culture will be its own worst enemy. But the risen Jesus is not so much focused on gloating at the defeat of his enemies as on proclaiming healing for the world. That will be his message to the apostles. They should go and make disciples of all nations including – and perhaps especially – those who opposed him. The whole mission of Jesus was directed towards defeating the Kingdom of Satan. But he wanted to win his opponents for eternal life. Jesus wants us to move away from the desire for victory that nailed him to the Cross and adopt a theology that will reflect what St Paul said, that Jesus was reconciling the world to himself. He has given us the message that they are reconciled. We are ambassadors for Christ's reconciliation, not for his vengeance. (Cf 2 Cor 5:19-20). It was the loving hearts of women who first encountered the news of the Risen Lord. A church based on too much theological testosterone will be seriously deficient.

Thirdly, today's great feast is not just directed at churchgoers. The message of Resurrection is directed to the whole of society. Jesus says that Resurrection is possible from the imposed and self-imposed moves towards isolation. Just because we have got more used to living at a distance from others does not mean that all we should prefer to stay prisoners of on-line entertainment and delivery services. Part of our desire to get back to worshipping in church is the conviction that we need to be together if we are to rebuild community and society.

Christ's message is that there is evil - and that it can be defeated. That struggle will cost. But love changes everything.

And we can do better than bringing on superficial socialising. For example, many young people are stuck under the oppressive rock that says they should not dream of better than partying and fear of maturing. Their desire for beauty in their lives is squashed by the expectation that throwaway relationships are the best you can expect. It says little for their dignity when the cultural message tells them that human relationships for normal people are based on the law of the jungle. They are not helped by poor example coming from leaders at all levels in society. Bad example of any sort is a sign of bad leadership. Young people hunger for heroes who will inspire them to engage with fixing real problems. They want to believe that Resurrection is possible for how we structure our society. Do we have civic leaders who will tell them that this is possible? Or do they have to believe that we are stuck with a world where too many of their age group are dying from dope and despair? Jesus proclaims that sin is not the ultimate winner and that divine mercy is available in floods. Christ's message is that there is evil - and that it can be defeated. That struggle will cost. But love changes everything. Politics and economics without resurrection will leave us permanently stuck at Good Friday.

Today, we celebrate our belief that we are not trapped in a dark world of Good Friday betrayal and pain, or of Holy Saturday emptiness. Our community is blessed with people who have known resurrection from addiction, or from bitterness about the past, or from the scars of abuse. Their lives tell us that we are not trapped by yesterday. This Easter day, we celebrate Christ's Resurrection and the unimaginable power of God's love to renew the face of the earth. Like the women and apostles, we are asked whether we dare to believe this unimaginable hope. That faith is the Rock on which Jesus will build his Church. That is the Rock on which the Alleluia people stand. Jesus is Risen and his grace enables Resurrection in every generation. That is why we are the Easter people and Alleluia is our song.