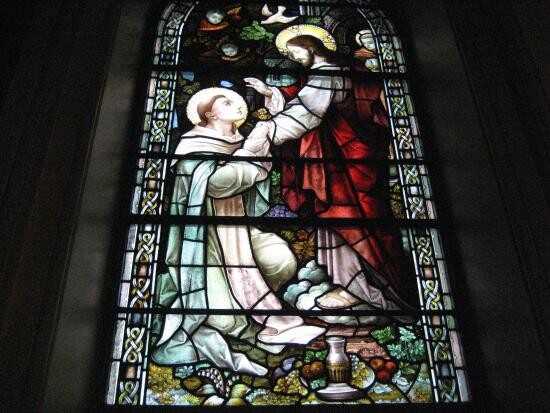 This year we begin a three-year run-in to the celebration of the 15th centenary of St Columba's birth, now believed to have taken place in 520. A vision for 2020 will give us an opportunity to reflect on and learn from the life of a baby who was born in the hills around Gartan Lough and who left his mark in various parts of Ireland and in Scotland. Indeed, nowadays he is acknowledged in different parts of the world – from a school in Delhi, India to the GAA club in Munich. So successful was he in developing a monastery on the remote island of Iona that many believe the Book of Kells to have been written there or by monks from the abbey. Ordinary people can do extraordinary things when they are open to grace and not to greed.

What might Columba say to us here as we remember his feast day on the hill where he founded his monastery of Derry?

Firstly, he has an interesting name. Colm means a dove – and that may or may not have been his birth name. But the name Colm has a distinguished pedigree because the word in Hebrew for a dove is Jonah. Those two men were brought up in the faith of their ancestors and both were somewhat reluctant missionaries in a foreign country. Jonah was sent to Nineveh where he had little confidence that his message would have any effect and ended up being throw into the sea, as he tried to escape God. Columba, too, had trouble with the sea as he set out to take on a very difficult task, partly in penance for trouble that he had been involved in. And tradition tells of the saint challenging a monster on Lough Ness. We all have our plans but we share with Columba a strange faith in a God who can write straight on very crooked lines, a God who can built peace even in conflict situations, who can calm the worst of stormy waters.

For me this means that where the Irish church is at present is a graced place, not a place of disaster. For those who believe in a God of forgiveness, our mistakes and stupidity can be places where divine foolishness is wiser than human wisdom. People become saints, not because they are perfect but because they allow the grace of God to weave something beautiful out of the imperfections of their lives and do great things with and despite them. In their failures Columba and Jonah discovered a God whose weakness was stronger than human strength. Holiness comes forth when we allow God to chisel away at our lives – often in painful ways – and allow little nuggets of divine beauty to sparkle.

The Irish church is being pushed out from its strongholds. That will be for the glory of God if only we can allow the Lord to push out into the deep – and not keep looking back to the deceptive comfort of our perceived strength. Columba chose Iona because it was s place where he could not see Ireland. We too have to find out own Iona, our place where we cannot look back to former glories and be led by the grace of God to places that we cannot see.

Secondly, Columba showed himself to be a wise leader. He took responsibility for the deaths that arose because of the battles that he and his people were involved in, especially since the alleged basis for the battle was a dispute over a religious book. Down through history people have fought over issues that were seen as being more important than people. We see leaders, sometimes religious leaders, who achieve positions of power by exploiting the fears and anger of others. Columba showed a form of leadership that was born of his being prepared to suffer by going into cold, challenging exile. The best of leaders – like Jesus – do not ask others to do what they will not do themselves. One of St Paul's letters talk of Jesus emptying himself of his divinity and becoming human – and then humbling himself even further to accept death on a cross. (Philippians 2:6-11)

We live in fraught times both locally and globally. This is a time for self-sacrificing leadership, not self-serving posturing. Young people want to be inspired by generous public servants, not by squabbling cheerleaders. This city of Columba has genuinely tried to show the way to the rest of NI. We have moved a long way down the road towards being at peace with ourselves. And that has come about because of generous leaders, ready to take risks. Society will not be transformed merely by changing borders or administrations. It will be enriched by generous leaders who love people and not just policies, who epitomise sanctity and not just sloganising.

We have seen that in Europe. The European project began with leaders of faith who sought to create a European community. That changed into a Common Market and now we are faced with working out what role we can play in a giant structure where strength seems to prevail over solidarity and the only possible form of holiness is either celebrity status or financial strength. This is a time for leaders - locally and globally – who will build bridges and not walls, who build up people and not just poll ratings. Structures are our servants not our gods. Too many people are sacrificed on the altar of salvation by structural change. We need leaders like Columba, who will offer warm loving hearts and not just cold heartless systems.

Thirdly, Columba was a man of prayer. Prayer is sometimes seen as a silly childish attempt to wring favours from a distant or non-existent God. For Columba prayer was a discipline that moulded his heart in the image of the Lord who is the compassionate and gracious God, slow to anger, abounding in love and faithfulness (Exodus 34:6). There is no contradiction between a life of prayer and a missionary heart. For Columba, prayer was not an escape from reality but a call to go out. Those who face the long inner journey involved in a deep spiritual life are then able to undertake long outer journeys into unknown and challenging territory. It is not surprising that our culture, which promotes access to information about the whole world, is going in the direction of great local fragmentation and loneliness, where lives at the earliest and latest stages can be discarded as of no value. We have the crazy situation where people can have a thousand friends around the world and none around the corner. Jesus calls us in our own deserts and on our own Calvaries, not to seek to escape reality but to face it with faith in a God who crossed the stormy seas with us. Real prayer calls us embrace reality with courage, knowing that God in Jesus is in the midst of it.

Columba faced the same human crises and regrets, challenges and idealism that people face in every generation. Circumstances change but human beings don't. He would ask us who celebrate his memory to seek God in going out from our comfort zones, to offer loving, generous leadership at every level in society and to seek God prayerfully in both the windswept and the sunny days of our personal Iona.And if we do that we will be a blessing on today and on the tomorrow that we seek to create for our children.