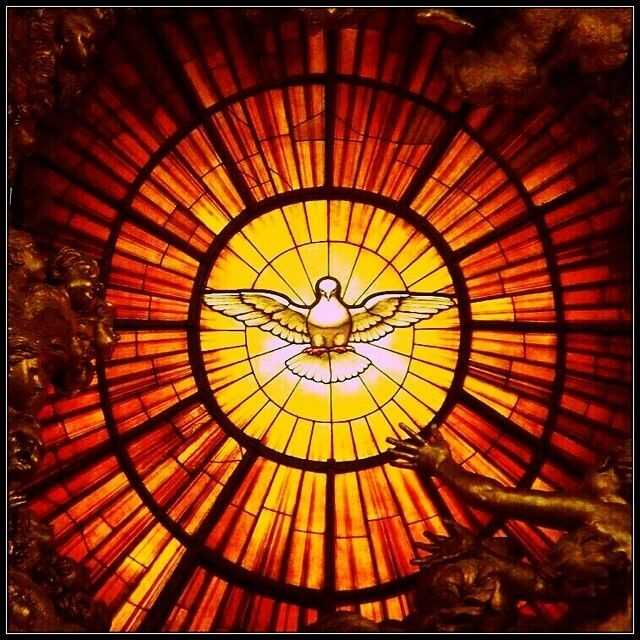 Today's first reading speaks about an event that obviously had huge significance for the early Christians. It marks the time when they were forcefully thrust out of the cosy comfort of the locked upper room and had to engage with the crowds outside, trusting not in their own wisdom but in the effect of the message that they would proclaim. And the tone changes from fear at the start to amazement at the end, when they see how the people respond. They are shocked by the effect of the message that they proclaim.

This event is told as happening 50 days after the Resurrection of Jesus – but the story was significant because every new community and every situation threw up the same feelings and fears. The bible is not a window on the past but a mirror on the present.

So what perennial elements appear in this story?

Firstly, we all fear rejection for being and believing. The early church had to be dragged and shocked into believing who Jesus was – and then to accepting that he was risen. One Gospel tells us that, on Easter Sunday, Peter just wanted to get back to fishing. Stop believing amazing things. Get back to the ordinary that promises little but risks little. The early believers may have been afraid of what could happen to them because they had some sort of belief in Jesus. Or maybe they were just afraid of being laughed at. So they preferred the prison of the upper room over the risk of putting out into deep water for a catch. It was safer and less risky to keep quiet.

That is the church in every generation. And the rest of society is content when religion stays as a private sub-culture, okay for those who like that sort of thing – but of no relevance to the real world outside. Have nothing to say about education or health care or poverty. Stay inside your upper room and eventually die.

But Pentecost says that the Church will thrive, not by protecting itself but by getting out and being proud of what we believe. We can feel safe inside our own walls, where we feel in control – but it is the safety of the tomb, for it believes only things about the past and sees no future.

Do you come here each Sunday as part of feeding a guilty secret – or do you believe that what you do here is of any value to the world outside? Pentecost tells me that we are not believers if all we do is sneak into our upper room here and then sneak back out again.

Secondly, I don't know what 'speaking in languages' meant on Pentecost Sunday. But what the apostle discovered was the message they had was not theirs, not in their control. The effects of their stumbling preaching about forgiveness of sin and a new way of life – these were built into a message that was more powerful than any eloquence the apostles might have had. Sharing the message means knowing what God has done for you in your life, especially in terms of forgiveness and healing – and then sharing that story about God. It is not merely saying how lucky you have been in life and how God answered your prayers. All knowledge of God comes because of a conversion, a change of heart. Know the difference that God has made to your life and be prepared to tell the story that you believe about the world. There are an awful lot of people out there who would love to hear good news about their lives – but after years in education and decades going to church, many of us could still not share our story with the broken hearts that walk our streets and beside us in the shops.

A personal faith locked up in the upper room of your heart is not a Pentecost faith. And you have to know you own faith journey – or all you have to share is theory, head-stuff – and that will never talk to broken hearts.

Thirdly, the Church in Ireland sometimes look s like a rabbit caught in the headlights, not knowing what way to turn. There are some that want to liberalise everything that Jesus taught and reduce it to so allegedly sensible, inoffensive pseudo-religious way of being nice. But just being nice wasn't the way of Jesus – from the Bethlehem stable to Calvary. He afflicted the comfortable and comforted the afflicted. That is a clear message about generosity and self-control, about idealism and self-sacrifice. Without a message that lovingly shocks our contemporary culture, we have are not a Pentecost church. And there are young people who want to let the Spirit do something heroic with their lives. A soft Gospel is a fake Gospel.

There is another road that some take. The emphasis on just personal piety risks withdrawing the church to the upper room where we can do holy things in peace. But right from the beginning the Spirit pushes the early believers out into the noisy streets. We have to have the smell of the sheep and not just the smell of the sacristy. Jesus did not go only to the perfect. Jesus went to the smelly, the lepers, those who could not love themselves. He became ritually unclean. Often he was rejected and misunderstood. But he had credibility because he went into desert places and rejected the temptation to be comfortable. The Pharisees did not have credibility because their piety led them to condemn and to walk on the other side of the road for fear of being contaminated by the man who fell among thieves. A missionary church is concerned about letting the Lord speak to what we do in church so that I can be better used when I am thrust out there. Both a softly, softly church and a church that flees from the imperfect world for fear of contagion – both those are unfaithful to the feast that we celebrate today.

Pentecost tells us what a healthy church should be concerned about in 2017 – for if we want to know what the Holy Spirit means, we look at the scriptures. We follow God's agenda, not our own. The puzzle on this feast is not about how the apostles spoke in various languages. It is about how we leave behind our upper rooms and our fears and get out into the street. It is about believing in the power of the Gospel message rather than being preoccupied about my weakness. It means believing that we are all gifted in different ways and that sharing the Gospel is not just a job for professionals. The Spirit asks us to love the world rather than to fear it.

No wonder the early Church remembered Pentecost – and the uncomfortable message that it held. No wonder many of us might feel happier if it had never taken place! But it did happen and we have to let God's Spirit burst the door of our locked upper rooms.