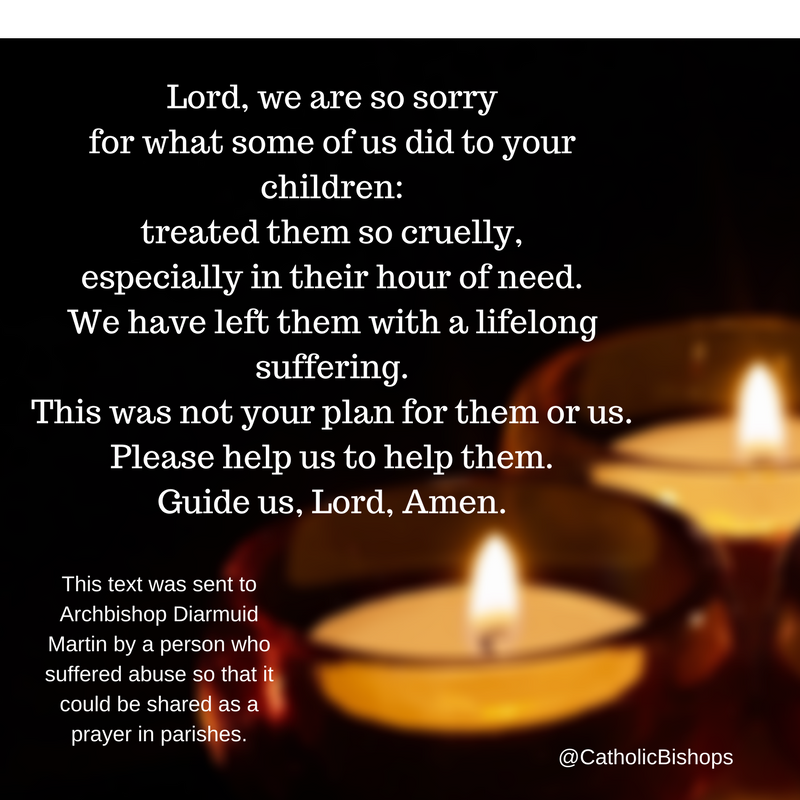 There is a very famous painting by the Norwegian artist Edward Munch, called The Scream. Painted with broad bands of garish colour and highly simplified forms, its portrayal of a person screaming silently reduces the figure to an almosthollow cloak in the throes of an emotional crisis. Some people who have experienced abuse in their lives suggest that this picture is one they can identify with. They are screaming inside but nothing comes out – and even the world of their environment seems distorted.

This is not something that happens mainly in a church context. The SAVI report some fourteen years ago suggested that 42% of Irish women experience some form of sexual abuse or assault in their lifetime – as do 28% of Irish men[1]. There are a lot of people in this city and country who are crying silent screams.

Tonight I am not concerned about why there is such a prevalence or whether there is more or less of it now than there was 50 years ago. But on this worldwide day of prayer for survivors and victims of sexual abuse our first step is to recognise that a huge number of walking wounded live in our communities. Our schools contain lots of children whose lives have been scarred by what happened to them in their helplessness. I do not know what lies behind many smiling faces or cases of addiction. But behind every person whose life or relationships are in trouble, there lies a story. And, for most people, that is a story that will not be told. At the beginning of Lent, it is important that we accept that very uncomfortable truth.

In fact, it is an acceptance of this truth that is important for those who have suffered. They are not just of cold statistics. They are people who have been badly hurt in their bodies, people whose hearts have been scarred by the actions of others. The first step of the hard Lenten journey is to be ready to hear the scream – and not to run away from it, no matter how uncomfortable that scream may make us feel, no matter how uncomfortable the truth may be. With Jesus we face into the reality of sin in our midst – but do so with the confidence that his grace is stronger than sin.

This is what our first reading asks of God's people. Lent is not just about pious practices but rather tackling the really difficult area of our lives. What is much harder than a bit of fasting is

to break unjust fetters/and undo the thongs of the yoke, to let the oppressed go free,/ and break every yoke, to share your bread with the hungry, and shelter the homeless poor, / to clothe the man you see to be naked and not turn from your own kin? Then will your light shine like the dawn/ and your wound be quickly healed over.

Secondly, the Year of Mercy was not just an opportunity to tell other people to repent. It was also a time when we were invited to know the compassion of God for those in pain, for those whose lives feel messed up and for those who feel they are beyond hope.

After all, Lent is not a time when we focus on ourselves and our good resolutions but rather a period of identifying with Jesus who will be seen as one rejected, burdened and finally crucified. And the Jesus of Good Friday identified with those who labour and heavy-burdened, with the least of his brothers and sisters. Our Lenten disciplines are not focussed merely on my self-betterment. Rather we are invited to take up our cross daily and walk with Jesus on his journey. He is the one who – as we will hear in Holy Week - is

Without beauty, without majesty.. A thing despised and rejected by people, A man of sorrows and familiar with suffering, A man to make people screen their faces. (Isaiah 53:2-3)

Lent is about identifying with Jesus, not about showing off to him how good and dutiful we are.

So on this Worldwide Day of Prayer for Survivors and Victims of sexual abuse, we remember the pain of so many of our brothers and sisters – and we commit ourselves to walk with the Jesus who is in solidarity with anyone who suffers. Our prayer is for those who are in pain, because of what was done to them – and for a generous compassionate heart in all of us. and it entails a commitment to do what we can to reduce the frightening level of such abuse in our communities.