Church of the Immaculate Conception, Strabane​

Shortly after the death of Bishop Seamus Hegarty last September, I visited Bishop Francis in his sick bed. I wagged my finger at him and jokingly said something to the effect that in three years I had buried two bishops and didn't want to have to bury another one for a long time! He smiled graciously, as ever – but clearly, he didn't take me too seriously. And today we find ourselves at his funeral Mass to which he had given much thought. Last Saturday, I was in his room in the hospital. His only concern was to talk about his funeral ceremony - and he wrote with his felt-tipped pen, "Keep the Mass simple." And music? "Simple". For Bishop Francis, the restrictions imposed by Covid have been ideal in enabling him to be buried with little fuss. In life and in death, he was a simple man.

Today we wear purple vestments. If we have learned one thing from the Covid situation, it is that rituals are very important in helping us to process the pain of loss. Many people have been unable to come to terms with the range of feelings that have to be dealt with after a death. We wear this colour at the time of death because the loss of a loved one is painful, it touches the depths of who we are. A wound is left where a person is plucked from us. It is healthy to recognise that pain. It is unhealthy to gloss over the pain of death with insipid words and casual gestures. Today we recognise the loss felt by the large extended Lagan family and by Bishop Francis' wide circle of faithful friends. He was much loved by them. Pain is the price we pay for having loved. In the hospital, I commented how faithful the family were in accompanying him and each other in his last days. "He was very good to us," came the reply. He had no children – but he was always a family man. So, we gather today with Jesus who wept at the death of Lazarus, and with Mary and the apostles who stood inconsolable at the foot of the Cross. Only when we acknowledge loss can we begin to process it in faith. Tears are a sign of strength, not of weakness.

He was one of the class ordained almost exactly 60 years ago, on June 19th 1960. That generation had entered Maynooth when the Church was shaped in a particular mould. He was part of a world where entering seminaries, monasteries and convents was widely accepted and encouraged. We see in his classmates just how many of the best young people heard Christ's call to minister in his name. And in the intervening years, he had to cope with many changes and challenges. Maynooth could not know in advance about the effects of the Second Vatican Council or the terrible reality of the Troubles or the many sad stories that would emerge about the Church, locally and internationally. We have all had to cope with the reality that we stumbled through the difficulties, often making mistakes, misreading situations acting or failing to act appropriately. Though he did not talk to me about that, I do know that he was a conscientious man who would have acknowledged his mistakes and humbly asked for forgiveness. As with every funeral, we come not merely to celebrate a life and gloss over some parts of it - but to come before the Lord of mercy and forgiveness. If we were able to claim eternal life because of our lives, Jesus's death would have been a waste of time. We come at every funeral to give thanks for the good that a person did and to recognise their need for divine forgiveness. Bishop Francis would have been the first one to remind us of this Gospel truth. Trust in the mercy of God enables us to be at peace today. Jesus gives us that great freedom, because he has carried the Cross of our sin.

Bishop Francis was born in 1934 at the foot of the Glenshane Pass, the sixth in a family where seven children grew to adulthood. After studying in St Columb's College and Maynooth, he was ordained on June 19th 1960. Teaching was where he spent the first 16 years of his ministry. He was known as a kindly teacher. There is nothing as strong as real gentleness and nothing as gentle as real strength. After five years here in Strabane as a curate, he was put in charge of St Mary's, Creggan – at a time of widespread chaos and violence. But his talents had been noticed and in 1988 – in the midst of chaotic events following the Gibraltar shootings – he was ordained as Auxiliary Bishop of Derry. The next 22 years were marked by ongoing turmoil in church and in politics. A few months after he submitted his retirement on his 75th birthday, he was able to retire in his beloved Strabane. When I came here first in 2014, I turned to him for guidance and advice. Suffice to say that he was wise and insightful. He was always kindly and appreciative, never intrusive. Often Bishop Philip Boyce would have driven from Letterkenny and parked his car at 9 Glen Road and we would have travelled together to Maynooth for meetings. I will just say that Bishop Francis had a broad smile on his face as waved us off! He didn't miss long business meetings. He was a pastoral man who wore his office lightly. He was aware that all he could do was his best – and leave the rest to God. It is no surprise that the episcopal motto which he chose in 1988 was "Jesus Christus Spes Nostra" (Jesus Christ our Hope). Last Saturday, when I called in to see him, Breedge was praying with him. That was where he found his strength to face and talk about his dying. For believers, our hope is never in our own wisdom or skill. As Jesus told Marta, he alone is the Resurrection. It is he alone who can free us and our world from the cold tomb where sin and death have laid us.

He died in the early hours of the Feast of St Columba, a man of peace. And he is being buried on the feast of St Barnabas, whose name means 'son of encouragement'. Bishop Francis was a man who could claim to be a descendant of both. He wished to have this funeral Mass in Strabane where he had lived for over 35 years. But he wanted to be buried in his native soil of Maghera. He was deeply rooted in the life of that community and of its strong cultural traditions. Those who know their roots are well equipped to spread their wings. As we commend his soul to God, we might pray a prayer attributed to St Columba, which one priest sent me yesterday.

O Lord, grant us that love which can never die,
which will enkindle our lamps
but not extinguish them,
so that they may shine in us
and bring light to others.

Most dear Saviour,
enkindle our lamps that they may shine
forever in your temple.

May we receive unquenchable light
from you so that our darkness
will be illuminated
and the darkness of the world
will be made less.
Amen. 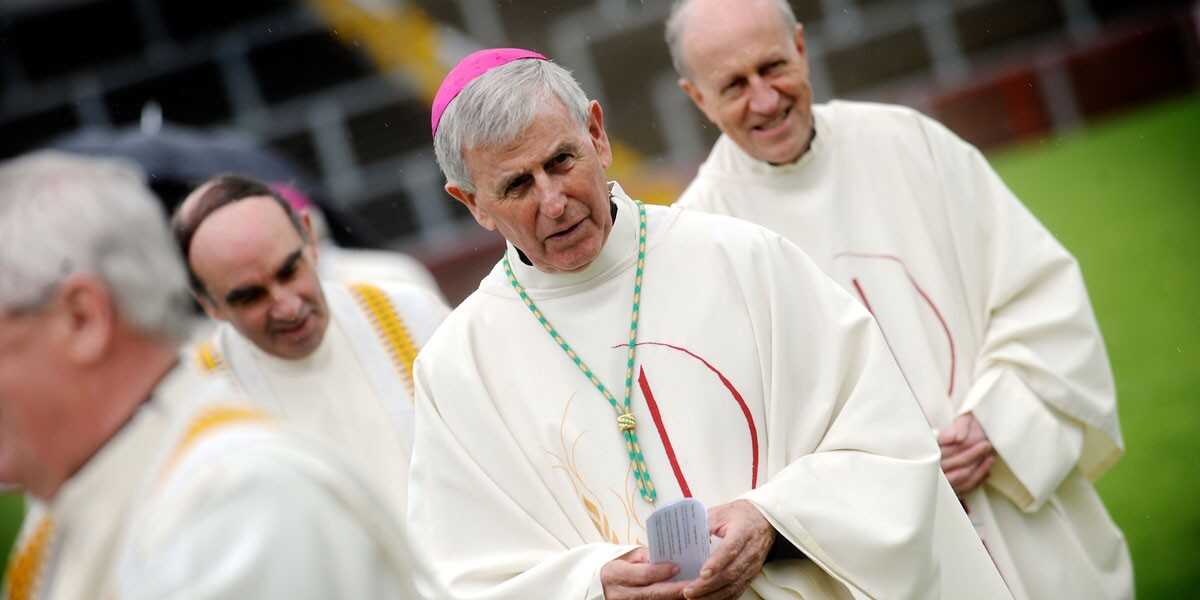