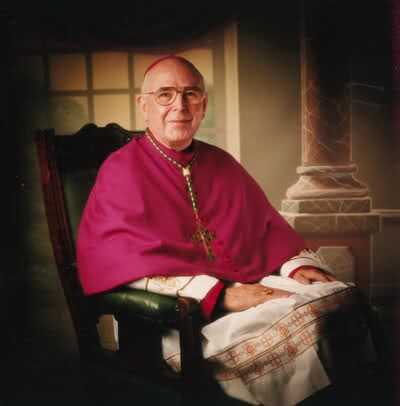 Bishop Daly was ordained on 16th March 1957, a priest of the Diocese of Derry. His first appointment was as a Curate in Castlederg, Co. Tyrone. In 1962, he was appointed as a Curate in St. Eugene's Cathedral, Derry. In 1973, he was appointed Religious Advisor to RTÉ, Dublin. In 1974, he was ordained Bishop of Derry, where he served until serious illness compelled him to retire in 1994. In retirement, despite poor health, until earlier this year Bishop Daly continued to serve as a dedicated Chaplain to the Foyle Hospice, Derry, a ministry in which he touched the lives of so many people. He also served as Diocesan Archivist.

Bishop Daly served, without any concern for himself, throughout the traumatic years of the Troubles, finding his ministry shaped by the experience of witnessing violence and its effects; through this dreadful period he always strove to preach the Gospel of the peace of Christ.

Bishop Daly provided an example of priestly ministry which was exemplary, inspired by service of God and the people he encountered. His ministry was characterised by his deep love of the people of this diocese, his dedicated visitation of parishes and his constant availability to others. The bishops, priests and people of the diocese were blessed to have such a dedicated and faithful priest among them.

May Bishop Daly rest in peace.