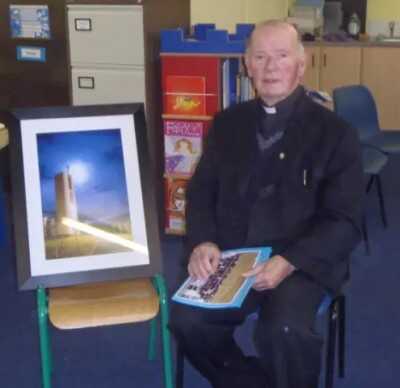 From the homily of Fr Eugene Hasson at the Funeral Mass for Fr George:

"Fr. George's story began not too many miles from here in Carndonagh where George was the youngest of a family of 14 siblings, three of whom died in infancy as you his family know. We express our prayerful solidarity with his surviving sister Ann and his many nephews and nieces who have gathered here this afternoon.
George was gifted athletically. As a young man he was a talented soccer player, playing centre-forward for Carn Rangers and he maintained an interest in soccer and many sports. I remember that Monday afternoons were sacred for a four ball at Baronscourt, Newtownstewart. Fr. George told me that Monday's were their day, on that course where they prepared their homilies for the following Sunday!

Through a journey of 60 years of ministry in this diocese Fr. George served in the parishes of Greencastle (Co.Tyrone), where his uncle Fr. George Nelson had been he em first parish priest of that new parish in 1892; Glenullin in Co. Derry in the parish of Errigal where his parish priest was Fr. Lagan, uncle of Bishop Lagan here today; Lavey in south Derry, Dungiven in North Derry, Drung, Co.Donegal, Cappagh/Killyclogher C.Tyrone, Dunamanagh, where served 21 years as parish priest until the 'magic age of 75' (that was how he described it in his notes) and finally he was very happy to return here to this parish where Bishop Hegarty invited him to minister in Desertegney."