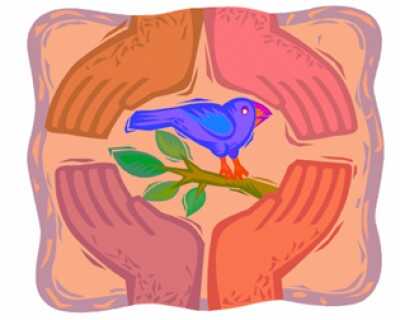 We have just emerged from one journalist has described as the 'year of anger'. In this context of such a very uncertain future, Pope Francis has issued his message for the Fiftieth World Day of Peace – and he has taken as his theme Nonviolence: a Style of Politics for Peace. He notes the horrific slaughters of the 20th century – where maybe 100m people died in wars – and the current 'piecemeal violence' in many places.

But in the face of many powers who advocate re-armament and confrontation, he says quite clearly, 'Violence is not the cure for our broken world....To be true followers of Jesus today also includes embracing his teaching about nonviolence.' Violent conflict means that 'vast amounts of resources are diverted to military ends and away from the everyday needs of young people, families experiencing hardship, the elderly, the infirm and the great majority of people in our world.' That offers no hope for peace.

We need hospitals rather than bombs that destroy hospitals, we need schools that teach people to shape the world rather than populist rhetoric that so often rides to power on the backs of the poor. The little ones of the world are abused by those who exploit them and often abused again by those who exploit grievances but often serve only themselves.

So the Pope invites us to celebrate the octave of the birth of the Prince of Peace, who took flesh among the poor, was made a refugee from his own country and who would die on the cross because he disturbed the powerful. He resisted the temptations to be famous for being famous. He sacrificed himself for others rather than using others for his personal glory. He offered a model of faithfulness and compassion rather than of frivolity and escapism.

So on this World Day of Peace what might we pray for and what hopes might mark our lives as a local church?

Firstly, we have begun preparations for Ireland to host the World Meeting of Families in August 2018. We know from our own situations that families do not come in one format. They are made up of human beings with their own needs, histories and dreams. Many people are blessed to grow up in a very stable environment. Many others are scarred by addiction, betrayal, abuse, illness and human frailty. In his document Amoris Laetitia, Pope Francis was not trying to play down the ideal of family life – but he was asking us all to recognise how many adults have never known what a stable, violence-free, addiction-free home was. Many have never seen parents with a long-term committed relationship. Many never knew there was anything other than violence in order to resolve conflict.

And the culture seems to invite them to take as role models - as the best that human beings can aspire to be - individuals for whom celebrity status is only thing worth dreaming of, whatever price they pay. As a Church can we promise to never cease proclaiming the possibility of faithful, monogamous relationships through thick and thin – and still witness to the reality of forgiveness and generosity? We believe in a God who sees the heart and does not judge as we do. The promotion of the stable family is central in creating generous loving hearts.

Secondly, Pope Francis quotes Pope Benedict who says that nonviolence is not merely tactical behaviour but a person's way of being, the attitude of one who is so convinced of God's love and power that he or she is not afraid to tackle evil with the weapons of love and truth alone. Love of one's enemy constitutes the nucleus of the 'Christian revolution'. Faith is not merely an intellectual commitment to a series of truths. Belief in Jesus involves a new heart that sees and loves the world through new eyes and new attitudes.

In a world where we encounter much depiction of violence, it can be hard to develop a peaceful heart. We live in a cultural environment where many commercial forces struggle to colonise our imaginations. We are in a situation where many parents are made to feel that they are under privileging and neglecting their children if they fail to bring them to Disneyworld. The modern hero kills the baddies – and we are asking our children to believe in a God who absorbs pain rather than inflicting it. The rich imaginative world can be used to enslave people and not to liberate them, to limit their horizons. Can we find creative ways to nourish the spirit of our contemporaries with a language that speaks of hope and healing rather than just of escapism?

Thirdly, I have felt very out of touch of various occasions in the last year. I had known something about Fidel Castro and Zsa Zsa Gabor and knew a little about Leonard Cohen. But when some other celebrity deaths were mentioned on the media I couldn't tell you the names of any songs sung by George Michael or David Bowie, I had no idea who Carrie Fisher or Princess Leah was and I had never ever heard of Rick Parfitt. But apparently, for many people, they were heroes, people with fan clubs, whose posters hung on walls and who were feted around the world as great role models.

But last September, I had the opportunity of being in Rome for the canonisation of a real hero, St Mother Teresa of Calcutta. That was someone who was not just famous for being famous. She left behind her, not a series of songs that will be quickly forgotten nor a history of drug-taking and unsteady relationships – but a track record of caring for the needy and the 'unfamous'. And her life story was all the more counter-cultural as she was canonised in a year when giant political egos clashed and votes were won with the promise of building walls, not bridges, and with a clarion call to make some country great again.

The non-violent heart that Pope Francis talks about will not be created by merely teaching Gospel truths but sowing the seeds of peace in young hearts, modelling a different set of values and nourishing youthful imaginations with visual portrayals of how God sees the world. Faith will live on where there are communities of people who become increasingly fluent in the language of forgiveness and reconciliation. In Northern Ireland, we have seen many wonderful people with those sorts of hearts – and for many of them faith was at the back of their ministry.

Ultimately, what is important for Christians is not the New Year's resolutions that we make. Rather what we celebrate is God's resolution to 'redeem the subjects of the Law and to enable us to be adopted as his children.' In the words of Pope Francis, God remains hopelessly hopeful for us.

And with confidence in that we can face 2017 with hope in our hearts.